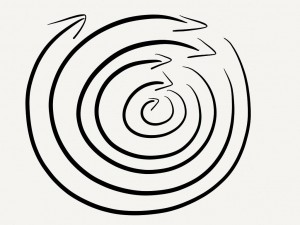 Once again, an encore or déjà vu… Is that really you? Romance a second time, a trip, a hike, a meal or rhyme. Sometimes it’s intentional, other times coincidence or fluke. Either way, to return can be intriguing, simply annoying or slightly strange. If you replay…will things really change?

Phil Evans retired from Pima College after 20 years as Bilingual Counselor/Advisor/Coach. (the first person hired to the specific title in PCC history, as far as he knows…) Previously, he had served in similar roles at Hollinger School, Wakefield Middle School, Tucson High School & Canyon del Oro (Cross) JHS. He’s a 55-year resident of the Old Pueblo with various explorations into 15 different career options in six states & Brazil. An avid (well, once his knee replacements re-hab) hiker, he walks Sabino Canyon once a week, and has explored some of the highest peaks in the state, the Grand Canyon (more in my “story”) & a few other locales in  other states. A fluent speaker of Spanish & Portuguese, he has traveled to England, France, Spain, Portugal, and of course, Brasil & Mexico.  He is involved in various volunteer experiences:  the Tucson Folk Festival (April 30-May 1 this year), the Pima County Sports Hall of Fame, the Educational Enrichment Foundation, the Tucson Rodeo Committee, Tucson Meet Yourself,  and Meet Me at Maynards.  For more than 30 years  he has served as co-facilitator & trainer of leaders for Divorce Recovery Groups.  He firmly believes that “It’s not good enough to leave the world the way it was when you got here!”

My name is Ilse Rodriguez, I’m 21 years old and I was born and raised in Nogales, AZ a little border town just south of Tucson. I am a junior at the University of Arizona studying Communication with a double minor in marketing and government and public policy. I also  work for a media company, “Scripps” through radio and television. I survive my days with copious amounts of coffee, sarcasm, and positive energy. I live my life looking for the good in people, and I believe that laughter is the best medicine. I also have a dope puppy named Peke with a massive under bite.

Leishara Ward is a force of nature. The adult child of former San Francisco flower children in the 1970s, she has made her way through life one step at a time. Trusting that there is a larger power in this universe and in the motto that “it’s always working out for me,” has given her the strength to make big, bold decisions. After graduating with a bachelor’s degree she moved to East Africa where she lived for almost four years working with women and youth groups, teaching business classes, building water tanks, starting a local branch of the national library service, and working with refugees hoping to resettle in America. Her subsequent experiment in stability included almost a decade working for a state government where the deep roots she set down eventually outgrew their environment and slowly but obviously began cracking the sidewalk above. So, two years ago she brought her children to Tucson and began attending the U of A. With the help of an amazing fellowship program and the love and support of her children, she has earned a Master’s degree, to be conferred in May 2016. Her varied life experiences and unique perspectives make her stories compelling and memorable.

Charlie Alcorn hasn’t stopped moving since graduating college in Central Pennsylvania. Using Philadelphia as his home base he has worked on tall ships, lived in Morocco and recently took a leap out to Tucson, AZ. All of this movement has been in search of how to create a positive ripple in this world. He looks through the lens of an environmentalist, musician, and activist. To support this vagrant lifestyle he works in online communications and is hoping to build the skills needed to empower people to improve their communities while being conscious of the natural environment and the world’s limited resources. Charlie sees stories as a way to share lessons learned, an awe of the unfamiliar, and instill empathy between friends and strangers. Laughter fits somewhere in there.

Nancy Montoya grew up in the small mining town of Clifton, Arizona. Surrounded by brothers, she believed she was just one of the guys. “I realized I wasn’t”, says Nancy “when my mom dragged me to J.C. Penny to buy a bra.” Life changed drastically after that, realizing that being sweet and girly on the outside was an advantage.  Make no mistake, Nancy has one hell of a left hook and can down tequila and curse up a storm with the best of them. All of this has served Nancy well as a journalist.  She won a Broadcast Pulitzer Prize for her reporting from Nicaragua and El Salvador during the civil wars of the the mid 1980s.  Nancy has worked as a reporter/producer for CNN, ABC and eight other large television markets including all three primary local TV news rooms.  Today she is the Senior Reporter for Immigration and Border Issues at Arizona Public Media, the NPR/PBS affiliates in Tucson.  She’s at the border all the time interacting with members of the US border Patrol and Mexican police. “Dealing with men at the border is just great,” she says.  “I’m too old to be a love interest – and old enough to be their mom.” Either way – Catholic guilt works great!  Nancy has been married for 26 to fellow producer Kirt Ijams and they have two sons, Ben and Hal.

Martha Delsid…..I like to say I’m a native Tucsonan. I was born and raised here, moved to Connecticut for a couple of decades and have been back in Tucson for more than 20 years. I’m a parent to a wonderful young man, and a board member and community ambassador for a local non-profit. After my son was born I went to school and became a respiratory therapist and later a sleep technologist. I love to garden, teach people about gardening, and advocate for food justice.
Curator Tony Paniagua