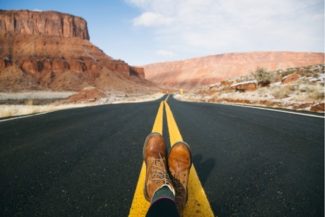 For one night only, the price of tickets will be $15 in honor of our 15th anniversary. You may also pay more, in $15 increments, as a donation to Odyssey Storytelling. However, this is a much-appreciated suggestion, not a demand. If you show up on March 7th with the usual $10 for tickets, you will not be turned away at the door!

Be sure to show up early this month, because in honor of 15 years of local storytelling, a fundraiser featuring a silent auction, raffle, and other donation opportunities, will begin at 5:30pm. There will also be food available from the EnjoyaBowls food truck! (https://www.facebook.com/EnjoyaBowls/)

If our stories have made you laugh or cry, if you have been touched or inspired by an Odyssey show, please consider doing what you can to keep us going for another 15 years! Thank you so much for your support!

A daughter of New England, Anne Baldwin grew up in a family of Irish storytellers.  Pre-television days, the family gathered for evening story telling, reciting poetry, and reading children’s books. Anne never chose to wash the supper dishes to avoid this entertainment. She loved the stories and poetry, and still does. She shared that love with her children and grandchildren, and with the children she served as a librarian in elementary schools up and down the east coast. In 2017 she left her cozy house in the beautiful Maine woods for the warmth of Tucson and the company of her daughter’s family. She is writing a book of her own, Mully, the Dog, and the Treasure. Set in Ireland at the time of the Viking invasions, the heroine, Mully, inherits the role of keeper of the tribe’s legends, and must save herself and the tribe’s treasure from the ruthless invaders. It’s an exciting tale and shows a truth Anne firmly believes: stories that are passed on with love are powerful, even holy, not to be treated lightly. She and her agent are negotiating with a publisher. Stay tuned.

An on-again, off-again adventurer, Susan Woodward lived in Seattle until age 13 and spent seven summers on her great-aunt’s ranch just north of Jackson Hole, WY. She has been married and divorced twice, raised two wonderful sons; designed & taught needlepoint for many years; worked 23 years as a realtor, then retired to become a full-time RVer. Presently settled in Tucson, writing, and painting, but the gypsy in her soul is whispering in her ear again. She is currently writing a book based on the events that triggered her RV adventures. The working title is When Things Change: Your GPS for Getting Unstuck & Reinventing Your Life. The anticipated publication date is fall 2019.

Bryan Lee has taken many different journeys as a performer. He first traveled the United States as Mr. Wizard’s assistant in Mr. Wizard’s Supermarket Science, delivering science programs hundreds of school children. After teaching drama for one year at The Richland Academy of the Arts in Mansfield, Ohio, the road came calling again. This time he set his sights on comedy clubs, casino showrooms, and theaters as his venue for his whirlwind 10-year stand-up comedy tour. Currently, Bryan Lee encourages individuals and companies to stand up, speak out, and reclaim their authority over bullies (www.100percentbullyproof.com) while traveling the world as a medical clown (www.ClownFitness.com).

Retired three years from working for the “man” (many women actually), Jim Lipson is a yoga instructor, freelance writer and extremely minor rock and roll celebrity courtesy of his band the Wayback Machine. A quintessential late bloomer, Jim also stays busy keeping up with his five year old daughter.

Robert Bell, a retired attorney, is Chair of the Board of Directors of the Pima Council on Aging, the Area Agency on Aging in Southern Arizona. Mr. Bell has been significantly involved with LGBTQ philanthropy in both Tucson and in Chicago and has led highly successful major gift campaigns in excess of $25 million. Among these, he recently co-chaired the capital campaign for the Southern Arizona AIDS Foundation to establish a dedicated center for LGBTQ youth in Tucson. An active volunteer with Southern Arizona Senior Pride, Mr. Bell also devotes his time as a core trainer with the Pima Council on Aging’s program for LGBTQ cultural competence training, Project Visibility. This program has reached over 3,000 personnel in local extended care facilities, nursing homes, and senior centers to promote awareness of the needs of LGBTQ seniors. He is also instrumental in helping facilitate the organizational growth of Southern Arizona Senior Pride.