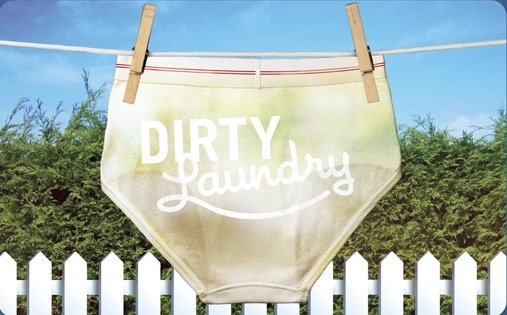 Soiled, dirty, and not ordinarily for public exposure.  Efforts to refresh, renew, and clean up.  We all have dirty laundry of one type of another.  Join us as we air stories from the back of our “closets.”

Storytellers:
Once upon a time, Jeff Whitehead could remember your name. After he was diagnosed with cancer in 2005, he lost his short-term memory but has since regained most of it. That does not mean that the long-time Tucsonan can remember your name. Now, since he’s been cancer-free for 10 years, he might be able to remember your name, AND your favorite color. No guarantees.

Originally hailing from New York, Gretchen Wirges followed her heart to Tucson 14 years ago. Gretchen is a writer, actor, improv teacher and performer who can be seen on a variety of stages in Tucson; from storytelling events, to Old Pueblo Playwrights new play festival, to singing and dancing with the under-rehearsed and over-dramatic Musical Mayhem Cabaret. Gretchen is also on the board of the Tucson Fringe Festival. She performed for four years with local improv troupe Not Burnt Out Just Unscrewed and has since branched off to be part of a new improv theater called The Comedy Temple where she teaches basic and advanced improv techniques.

Troy E. Larkin is a lawyer by day and silly-heart by night.  He loves writing, movies, television, and singing poorly to the radio.  Before losing a dare requiring him to move to Tucson, he worked at the Screen Actors Guild in Hollywood and spent his days lollygagging about on beaches in Southern California.

Matthew Trace Mutz, born and raised in Missouri, swore he would never live in  Kansas, but has been there since 1978.  He’s an Aquarius, single, 61ish, Eagle Scout, active in the Masonic Lodge, Shriner, and presently lives in Belleville, KS.  Matt is the Warehouse Foreman for Reinke Manufacturing (one of the big 3 in the center pivot irrigation industry, the circles on the ground that you see when you fly.)  He has two ex-wives (very good women) and 3 great sons.  Matt always thought he would find a redhead to take long rides with on his Harley and live happily ever after.  He found love again at 55, but Love moved to Hawaii 2 years ago, and he hates Hawaii.  Matt is an adventurer, bow-hunter, Republican (I know), Class President in HS, and voted Most Humorous and Most Likely to Take a Life, Class of ’73.  No formal education, attended the Farmers University of Central KS, (good ol’ F**K U!)  His music interests range from Mozart to Marilyn Manson….he also loves the blues but it depresses him.  Over the years he has been a motel owner/operator, general contractor, tile setter, and Jack of All Trades, Master of none.  He believes every kick in the ass is a boost forward.  He also believes that when you reach 60, you shouldn’t have to pee in the cup….(he also believed that at 30,40, & 50).

Brian Taraz aka “Satan” is a proud dad of a 16 and 12 year old. He’s acted locally with the Rogue theater, Borderlands and Beouwulf Alley.  Brian currently djs Wed from 5-7 on Downtown radio, 99.1 FM and most recently had 4 wildly successful performances of his one-man ego fest show, “An Evening with Satan”. He’s currently developing a grass roots think tank called Southern Arizona Total Awareness Network (S.A.T.A.N.). Visit us on Facebook. 🙂  Dirty laundry is his lifestyle.