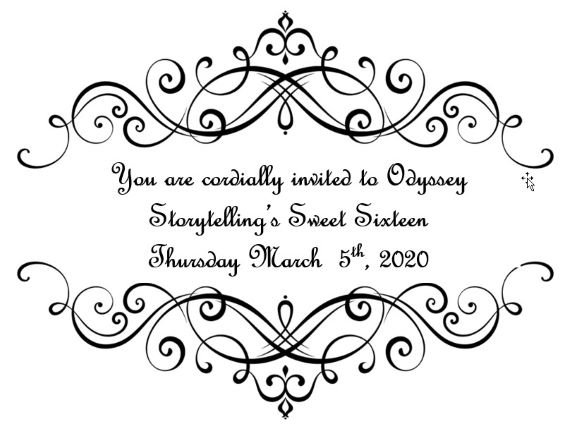 There’s a special time in a young person’s life….well Odyssey’s there too! Let’s celebrate our coming of age together! Sweet sixteens, quinceañeras, coming of age, and whatever else helped you grow up. Our anniversary show will have it all!

Storytellers include:
Ron Lancaster: After a way too long short stint in the Army, Ron made his way in L. A. as a comedian until he realized no one was laughing. He turned naturally to a life of an accountant, which wasn’t that funny either. Next he owned a string of night clubs (2), and taught English for years at a local high school (2). As a storyteller for the last 30 years, he had his own Radio and TV show (Stories for Grownups), become an uncelebrated author, writing 5 books on arcane subjects, and has performed in many venues small and smaller. Tonight’s true tale concerns his brief brush with sex, and his first hard lesson in life, “How I Learned Not to Kiss Your Cousin.”

Carolyn King: Originally from the Chicago area, Carolyn came to Tucson 20 years ago from Central Mexico. There, over the course of 30 years, she ‘came of age’ steeped in Mexican culture, studied visual arts, became a mom and founded Corazón del Artista, a small private Art Center. Here in Tucson, she has worked as a teaching-artist in many diverse settings with community members of all ages and abilities. Currently, Carolyn is exploring ways to embrace and adapt to all the huge changes occurring in Life on personal, national & global levels

Adventurous, fun yet forgiving persons, Don and Gretchen Hegeman share interest in many topics: spirituality, health, social justice, nature just to name a few. Launching three adult children, they’re collecting their reward through six grand kids. Traveling, living and house sitting in many states and a few countries over the past 28 years, they just returned back to Tucson to settle down in retirement.

Roberta Rubin: Reaching Sweet Sixteeee…something, unexpectedly liberated Ro from the constraints of judgments and expectations of others. This unleashed freedom loosened her already pretty sassy mouth. Not knowing what’s going to come out of it delights Ro and her audiences. Provocative, silly, profound or irreverent, her truth is the common thread.
Peace, Love and Wiener Dogs.

Patricia Fagan, a native of St.Thomas, Virgin Islands, has been living in Arizona for the past 32 years. Her poem, “Jewish Island Girl,” has recently won The David Hough Literary Prize published in The Caribbean Writer. Another poem – published in The Caribbean Writer – “Daydreams on a Subway Train,” was picked up by McGraw Hill to be used in a college textbook, Spotlight on Music. Her poems and short stories have also been published in: Sinister Wisdom, Embers, River City and Sandscript. Patricia has also written travel pieces and book reviews for The New Haven Register and Grolier Press, respectively. She is now back working her art after 10 years of taking care of husband who had Parkinson’s disease.

Steven Braun has been telling stories on the Odyssey stage since 2014, and his many appearances as a storyteller and curator belie his claim of glossophobia, a fear of public speaking. In fact, Steven is no stranger to this and other social anxieties, and admits to a certain appetite for the adrenaline rush that comes with facing down one’s fears. However, this was not the case in 1988 when, during the second year of his 33+ and counting marriage to Phyllis, Steven was admitted into a 30-day substance abuse program at a psychiatric hospital in Amityville, NY, one town east of where he grew up. This was his coming-of-age experience and tonight he will talk about it in a story entitled, “Clean and Scared.”

Producer: Ana Gaskin was born in Michoacan, Mexico and grew up in California. She’s lived all across the nation where she’s read stories and poetry on stage and performed monologues.  She has tons of stories to tell, and loves to talk.  Be careful getting her started!  She is an HR expert by day, a writer, and recently started doing stand up comedy. Ana currently serves as Executive Producer of Odyssey Storytelling.