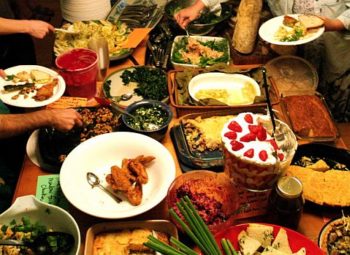 After retiring from a variety of careers, Mary Jo Pollack is now a struggling writer. Her interests have always included creative pursuits from jewelry and furniture making to culinary arts. Time is a challenging balancing act of working on a book, new art projects, and social engagements. She just passed her third anniversary as a Tucsonan.

In spite of his insistence that he has a paralyzing fear of public speaking, this is Steve Braun’s fourth full-length story for Odyssey. Now a communications supervisor for an emergency 911 dispatch agency, Steve spent most of his adult life as a professional chef, but it’s his 29 years of sobriety that give a new twist to the term “Pot Luck.”

Leigh D.C. Spencer is the author of Tequila and Cookies – a poetry collection, and the co-author of She Too – four voices in almost harmony. She also has an impressive apron collection and enjoys making candy shaped like everything from brains to vaginas to mustaches. Leigh currently lives in Tucson with her hilarious and supportive husband, two inspirational sons, four rescue dogs, four turtles, a tankful of hermit crabs, and a big lizard named Levi. She is a regular storyteller with FST! and is currently co-editing The Best of FST! Anthology, Volume 1 with fellow-FST!er, Mel Madden.

Paul Lee grew up in Boston and has been living around Arizona off and on for fifteen years. He’s a musician, sound healer, artist, and a stress management trainer, and is passionate about helping people. Paul is proud of having bipolar disorder and has worked as a Peer Support Specialist with clients who have mental illness. He was also once a graphic designer for a Star Wars defense project at Raytheon Missile Systems here in Tucson. Paul’s 15 minutes of fame came when he became a contestant on MTV’s game show “Remote Control” and he won fabulous prizes. He still chases the dream of being a very minor celebrity.
Ethel Lee-Miller

Veneranda (Vene) Aguirre is originally from Nogales, AZ, but has lived on and off in Tucson since she first attended the University of Arizona in 1996. She graduated with a Bachelor of Arts with the completely useless degree of International Studies with a focus on political and economic development in Latin America. Vene went on to do the only thing she was fit to do with the degree, which was to go to law school at the U of A. She has since lived many lives, the most recent as a writer. Her hope is to get her novel The Good Girl’s Playlist published this year, partially so she can write all her living expenses off her taxes. When she is not writing, Vene can be found at concerts all over the United States and Europe.

Barbara Eiswerth a resident of Tucson since 1992, worked as a research geologist specializing in Geospatial Information Technologies with the US Geological Survey. After ten years working extensively with technology transfer in Latin America, she pursued a career as an environmental scientist working with projects in East and West Africa. After receiving her Ph.D. from the University of Arizona, Eiswerth founded a community-based organization, Iskashitaa Refugee Network, focusing on UN refugees, while integrating the importance of a local sustainable food system. The program has evolved from harvesting a few thousand pounds of fruit to an annual harvest of over 50 tons of fruit, nuts, and vegetables from backyards and local farms and orchards. She serves on the state Linking Edible Arizona Forests (LEAF) steering committee, heads the UA LEAF project, and is an adjunct in the UA School of Natural Resources and the Environment.

Ethel Lee-Miller continues her love affair … with words, adding storyteller to her memoir, personal essay, and life skills writings. Every event, no matter how mundane or crazy, offers delicious food for thought. Just add keen observation or imagination and a story emerges. Many of her stories are in her memoir Thinking of Miller Place, a twin’s family perspective; her book of essays Seedlings, Stories of Relationships, some true, some “enhanced”; Muse Matrix, a women’s anthology of writing and art; and her writing life blogs at http://etheleemiller.com. Her latest adventure with words is happening with Improv 101. But tonight it’s strictly the truth with one experience in potluck.

Jess Kapp (curator): Born and raised in Rochester, NY, Jess is still adapting to the desert lifestyle sixteen years after moving to Tucson. She spent much of her youth dreaming of being an entertainer, but somehow ended up with a PhD in geology. She taught high school math and science before landing a lecturer position at UA, where she is now the associate department head in the department of geosciences. These days, she teaches introductory earth science to hundreds of less-than-impressed students every year, while raising two sons and trying to foster her passion for writing. Her latest project, Girl on the Roof of the World, is a memoir about her transformative experience trekking across Tibet on a three-month long scientific expedition. She blogs on her website http://jesskapp.com and on Huffington Post. You can also find her on twitter @jess_kapp.