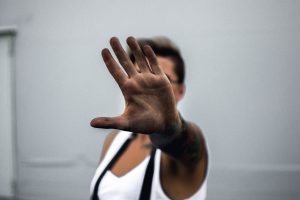 Tarnished, messy, grubby, or gross. Dirty jobs reluctantly (or excitedly) completed. Pollution, contamination, and related activism. Cheating, scheming, and deeds done dirt cheap. Bawdy, edgy, filthy, and certainly not safe for work. Pack an extra change of clothes and a bottle of hand sanitizer, because Odyssey is getting “Dirty” in February.

Mo Goldman has been dirty for most of his life. It all started when, as a youth, he fell in love with a book called “Mooch the Messy” about a young, messy rat who never cleaned up after himself. In grade school Mo would beg for pizza from the older kids and when they got to the crusts they would throw them into the grass and Mo would fetch and eat them. This may explain why he’s chemically imbalanced today. After high school, Mo attended Syracuse University where he lived in a house which one person described as a “tinderbox”, mice lived under his bed and did nothing to raise his likelihood of ever finding a love match. Somehow Mo found a person who could look beyond the mice, grime and odd behaviors. Much to Mo’s shock, she married him. Together they have created three human beings: thankfully, only one has followed Mo’s pattern for being a “scumbag”.

Jan Stapleman is a Tucson newbie who recently moved here from Colorado. A self-described word nerd, Jan has a long career in training and communications, including creating and delivering online and classroom training and handling communications for a state agency in Colorado. She says when she’s not being obsessive about grammar and punctuation, she’s an avid hiker, runner and gym rat.

Mary Jo Pollack began acclimating to Tucson desert life July 2014 via Los Angeles, via San Francisco Bay Area to return to college after 20 years, via Los Angeles, via St. Paul. Artists never completely retire, but she withdrew from the 9-5 grind a decade ago. She manages a balancing act of making act, jewelry and furniture, writing, volunteering, and her latest passion, storytelling.

Terry Ahearn and his wife, Linda, are empty nesters (or whatever it’s now called).  Terry’s perceptions of what life would be like at 65, when he was younger than 65, are nowhere near what life is actually like at 65. Terry is at that age where the kids are deathly afraid he’ll attempt the moonwalk at one of the family weddings. He is highly aware that his kids are deathly afraid. Terry is still writing short stuff that he hopes will bring a smile.

Melanie Black is a Super-Villain, Sorceress and Fitness Professional. She owns The Nerd Gym in Downtown Tucson. Melanie has been bringing the magic of fitness to nerds, freaks and geeks for over 10 years. Melanie loves making new friends and sharing knowledge! Send her a friend request on Facebook! Check out The Nerd Gym too! www.thenerdgym.com

CURATOR/PRODUCER:
Roscoe Mutz is a partner at Farhang & Medcoff law firm, where he practices employment law and civil litigation. When not put to the task of researching legal arguments and strategies, his brain is a factory for bad puns, dad jokes, and scatological humor. 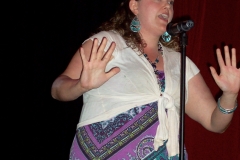 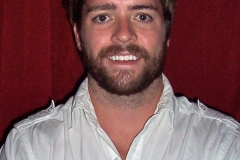 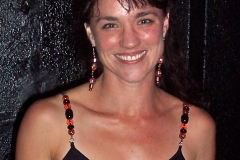