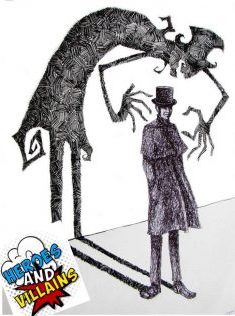 Heroes & Villains have faced off since the beginning of recorded history. Moses and Pharaoh, Beowulf and Grendel, Batman and The Joker, SpongeBob and Plankton; we love’em, we hate’em. Sometimes a single character can be a hero to some, and a villain to others. Do you know or have a hero? Do you know, or are you a villain? Has your life ever been impacted by one or the other? Let’s hear all about it at Heroes & Villains.

Ryan Bravin is not your typical University of Arizona student. His favorite things include dad jokes, milkshakes, and going for very long runs. When he’s not running on the treadmill, to and from class, or away from responsibility, you can find Ryan enjoying time with the ones he loves most. Upon his graduation in May 2020, Ryan will join the Teach for America corps, where he hopes to use his passions for speaking and writing to make a difference.

Pat Davis – I was a depression kid, born in Denver Colorado and raised in various places in California. My family moved to Hawaii when I was 9 years old, and we were evacuated in May, 1942. Hawaii had captured my heart and, as an adult I moved back four (final) times for a total of 30 some years. My husband and I have been married 60 years, have 5 children, and scores of grand and great grandchildren. I have had several careers along the way from nursing in Arizona, California, Hawaii and Toronto,Canada to staff services analyst for the State of California. I think I inherited my “itchy feet” from my Dad, as my husband and I have moved over 50 times. I consider our life to be a series of wonderful adventures, and we’re not through yet.

A 20 year Arizona resident by way of Wisconsin and California, Terry Ahearn is the lucky husband of his wonderful wife and talented artist, Linda, and extremely proud father of Haley and Cole! When not working at his aerospace career, Terry likes to write short stories, primarily humorous true accounts of personal experiences, and is a founding member of the Writer’s Bloc, a group of dedicated writers of multiple genres. A past participant of Odyssey Storytelling, Terry enjoys making others laugh at his frequent self-deprecating stories. “It’s fun to laugh at yourself, it’s a tonic tried and true.”

A.J. Flick is a writer, editor and repurposed journalist. She graduated from the University of Arizona with a degree in journalism. Her byline has appeared in numerous news websites and publications across the country, covering everything from news to sports to entertainment. She covered the case detailed in Toxic Rage, her first book, while reporting for the now-defunct Tucson Citizen newspaper. Since leaving daily journalism, she has been working as an author, freelance journalist, book editor, copywriter, screenwriter and campaign communications director. She grew up in Maryland, the Philippines, Indiana and Arizona and loves living in Tucson.

Shanin Williams is a dancer, painter & writer. This is her premier as a Storyteller. She is a recent transplant from Oregon. She waited nearly 40 years to return to the desert and wonders why it took so long. Standing up in front of people and telling her stories is both a long-time dream and life-long fear. She’d like her stories to be funnier.

Ana Gaskin recently moved here from Baltimore, has lived in Iowa, raised in California and was born in Mexico. Ana has tons of stories to tell, and loves to talk, so be careful getting her started. She’s currently working on writing her stories, preferably into a book that you may even enjoy some day. Ana has read several of her stories out loud for events and has also performed monologues. By day she removes her cape and tiara and puts on her glasses so no one recognizes her. Then, she just pretends to be an HR expert. Ana currently serves as Odyssey Storytelling’s Executive Producer.

Molly McCloy is a four-time Moth StorySLAM winner whose work was recently profiled in O Magazine. She holds an M.F.A. in Nonfiction from The New School, and she has facilitated storytelling workshops for Pima Community College, Quest Storytelling, the University of Arizona’s The Agnese Nelms Haury Program in Environmental and Social Justice, and Auto Entry’s Webinar Series for CPA Academy. If you need a storytelling coach or if your organization would like to host a storytelling workshop, contact her at molly.mccloy@gmail.com .

A recent graduate of the U of A School of Government and Public Policy with a Masters of Public Administration, Steven Braun (Curator) works as a 911 Communications Specialist Supervisor for fire and EMS. On his return to school after 30 years, Steven found that most classes required some sort presentation and that he suffered from an extreme fear of public speaking. His solution: standing alone on a stage under a single light, microphone in hand, telling embarrassing stories about himself. Not only did it work for school presentations, Steven found himself hooked on written and oral storytelling, and now volunteers with Odyssey, fumbling his way through website administration. Prior to his career in public safety, Steven worked as a chef for 26 years in New York and Tucson, where he was a partner at the legendary, but sadly defunct, Boccata Bistro Caffe. Steven has been married to Phyllis for 33 years and they have one child, Jax. To date, Steven’s published works include two recipes in an out of print cookbook, but he’s hoping to change that in the future. Stay tuned for more…